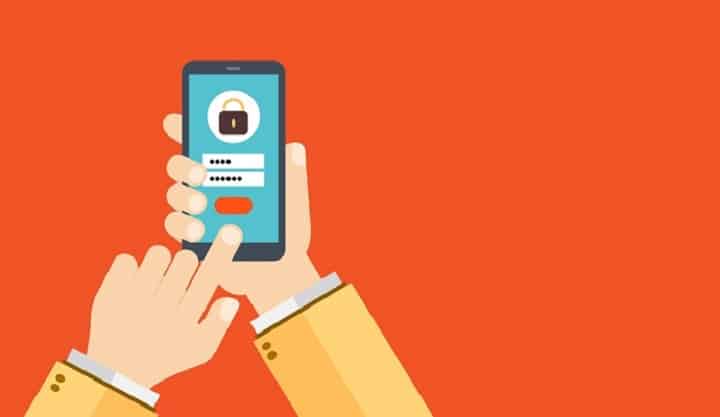 This wild and feature-rich technology era we are living in has changed the way we stay in contact for good. The standard GSM SMS protocol is long behind, the instant messaging apps and VoIP calls took its place. They are widely popular, they have funny emoticons and multimedia features, and they are most of the time free to obtain and use.

However, while we are enjoying the group chats, sharing photos, or trying to impose our opinionated thoughts on various subjects, we eventually think to ourselves:

And you have to know two things before you start deleting your chat history like a madman conspiracy theorist.

Moreover, their security holes can result in the loss or theft of personal data and credentials. Some of them can be used for marketing, others for cashing out your bank account. For that purpose, we prepared a list of those who can protect you. The ones that offer end-to-end encryption. Not exclusively the instant messengers we want, but the instant messengers we need. 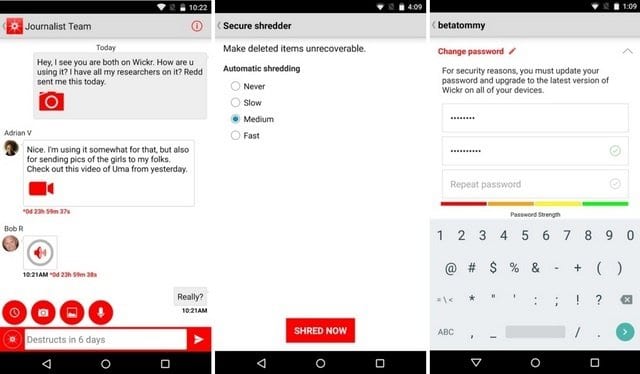 Wickr is an alternative messenger that is based on end-to-end encryption. Additionally, it has a large area of features, with the majority of them committed to privacy protection. As the developers stated, they don’t have any insights on sent or received messages and files, even the metadata.

The main privacy-specific features of Wickr are Shredder and Configurable Timer. Shredder lets you delete all your sent/received messages and files. With the Configurable Timer, you can set a time expiration limit on all of your messages. Once they expire, they get shredded and sent to the dark oblivion of nothingness rather than to service provider storage. Too bad you’ll need to enter your phone number in order to register.

When it comes to the standard IM features, Wickr is simple and intuitive. The user interface offers a simplistic workflow and you should get to know all the features in no time. Yes, you can send videos, photos, and voice messages. The issues are occasional glitches and crashes (especially on Android). Of course, that should be resolved with upcoming updates.

You can get it from Android here and Apple here. 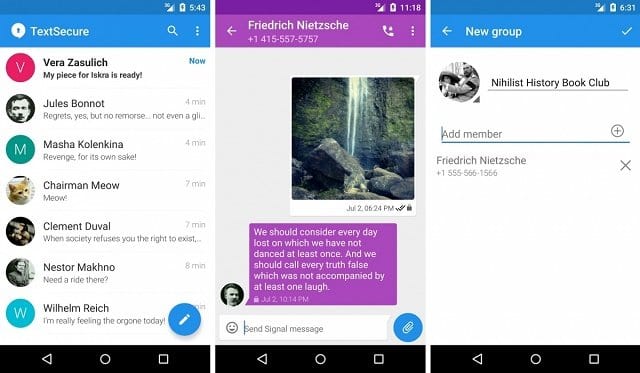 Signal Private Messenger is an amazing open-source app that offers just what you need: end-to-end encrypted messaging for both SMS and instant messages. The first evident distinction from the other available solutions is the open-source nature of the app. Anyone can look up codes and determine if the app is truly secure. Of course, that requires coding knowledge. Nevertheless, that doesn’t diminish the transparency, whatsoever. We, customers, have every right to demand it with every privacy-sensitive app.

As we already stated, all the text/media attachments you sent via Signal are encrypted and they can’t be stored on the server. Additionally, you can use it as a default SMS app and stay in touch with colleagues, family, or friends that don’t use Signal. In order to log in, you’ll only need your number. The app, like many others, automatically syncs your contacts list from the address book.

Moreover, besides the standard IM features, Signal lately offers video and standard calls. That is a great thing since you can use one app for all the communication features you can possibly need. The only problems are the lack of support for tablets and the missing desktop app for PC use. If we disregard those, Signal is possibly the best secure instant messenger you can get for free.

If you want to try Signal, it’s available for Android users here. iOS users can find it here. 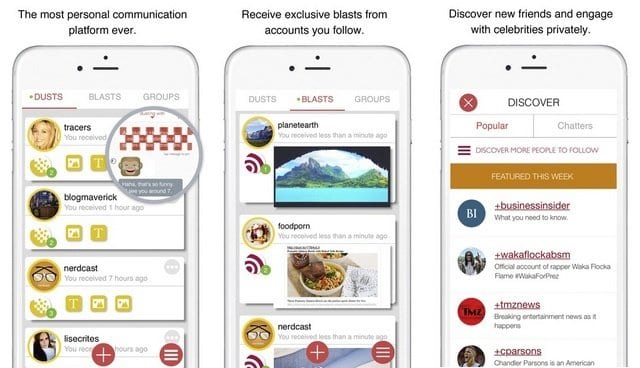 Dust is an interesting app that is not like others. That can be good or bad, it solely depends on your taste. However, the app functionality and privacy-protective features are well acknowledged. It is not as intuitive as Signal or as thorough as Wickr, but you can be safe knowing that your messages are secure and encrypted.

When it comes to security features, Dust offers standard end-to-end encryption with few additional tweaks. The same goes for all user privacy-oriented instant messengers: no one can see sent and received but you. Every Dust message is encrypted with its own unique 128-bit AES encryption followed by added security through RSA 2048-bit key. You can set an expiry date for messages (even right after the recipient read them), but they will eventually get deleted after 24 hours. In addition, you are safe from screenshots since your name is not visible while texting.

In other regards, UI and all-around usability are often sub-par in comparison to their peers. Dust is simple to use but lacks some of the advanced features you would nowadays expect from an instant messaging app. With that in mind, this is a nice app worth trying, but it is behind its competitors in other departments except for privacy protection.

You can download Dust for Android here. And the iOS version is available here. 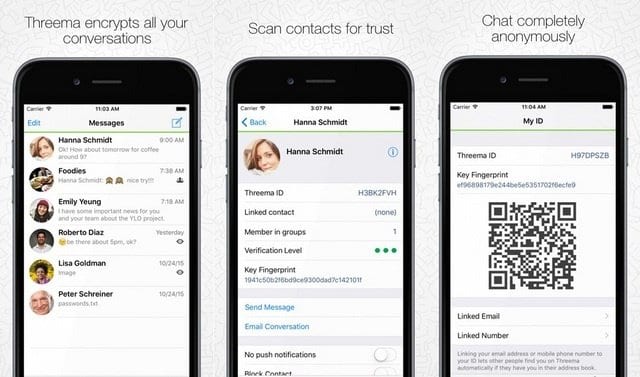 Threema is the unique privacy-oriented instant messenger with respectable security measures and a large variety of standard messaging features. In comparison to others, it offers some interesting innovations while preserving the end-to-end encryption that matters the most.

Firstly, you don’t need to enter your email address or phone number in order to register for Threema.  Registration is done with the specific individual Threema ID. This is a great way to surpass accounts and use traceless messaging. Besides end-to-end encryption, Threema stores app-related data on your device rather than on a server. That way, no one can reach your sensitive data and all messaging participants are hidden. Messages are deleted right after the recipient reads them. It is just what you’ll need from a privacy-oriented app.

However, security is not all that Threema excels at. In addition to the simple and well-designed interface, Threema brings to the table all you can ask from an instant messenger. You can send text, videos, voice messages, and photos. Both in individual and group chats. Moreover, you can send a large variety of files that are commonly not available, like GIF, PDF, MP3, ZIP, and others. That can come in handy in a lot of ways. Threema also offers a pool feature. so your friends can vote on different subjects. In addition, Threema is available as a desktop app, so you can use it on multiple platforms.

In case you want to try out Threema on your Android, try here. Or if you are using iOS, go here. 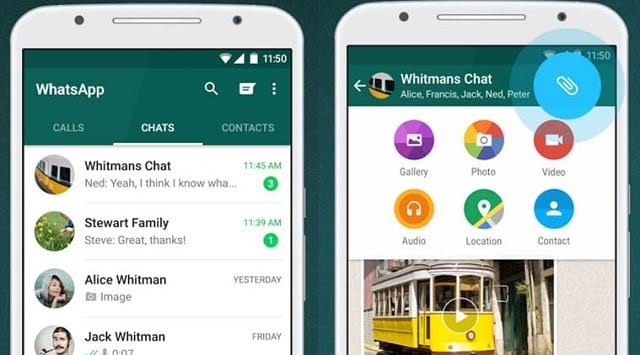 Well, everybody heard of WhatsApp! It started as a small project, gained massive popularity in no time, and ended up owned by Facebook. We are aware that Facebook is not best known for privacy protection. Actually, it is known for privacy intrusion scandals that are closely related to corporation data espionage and that NSA thing. However, WhatsApp and Facebook Messenger are not the same. WhatsApp is still the most used instant messenger. And it seems that privacy protection is finally getting some love.

Lately, WhatsApp finally implemented end-to-end decryption and stopped storing your data on their servers. WhatsApp now uses the Open Whisper Systems security protocol (the one used on Signal). At least to some extent. The prying eyes of Facebook employees can still find out who is the sender or recipient. Simply put, they collect users’ metadata for various reasons. Besides that, all of the cloud backups will, by default, store your chat history. For that reason, it is better to disable that feature.

Well, you may ask what is WhatsApp doing on this list? Simply put, the other services are not as used as WhatsApp. Because of the two-way street that is instant messaging, both sender and recipient the same app. So, this last input is some kind of lesser evil. You trade partial privacy with a small chance to endanger you for an app that is massively used around the world (more than 1 billion users). It would be great if those people choose Signal over WhatsApp but that is an unrealistic expectation. At least for now.

You can grab WhatsApp for Android here. iOS version is available.

As we all know, most apps have similar standard IM traits. But privacy and security are the most important ones and they are too often neglected. Well, things are changing. Users now ask for better protection rather than flashy emojis. And these apps should serve you justice in that department. We hope you liked our list.

What is your favorite messaging app? Do you think it offers enough security and protects your privacy?

Are you aware that your article is riddled with grammatical errors?

I wouldn’t call WhatsApp the safest messenger in the world. Telegram is actually a lot safer, but it gets unnecessary criticism. there are also several messengers not mentioned here, and they are all good.
https://software.informer.com/Stories/best-secure-instant-messengers-in-2017.html
There’s also the issue of those messengers working with cloud and Google docs
https://droidinformer.org/Stories/beware-of-google-docs-invites-it-could-be-a-phishing-scam.html
Instane messaging is not suited for document sharing for now, so it’s a loophole that actually needs closing. I wonder if it’s one of the future developments.

If the service can see from who sending whom, metadata is not protected.

To which exact part are you referring?

I wouldn’t call WhatsApp the safest messenger in the world. Telegram is actually a lot safer, but it gets unnecessary criticism. there are also several messengers not mentioned here, and they are all good.
https://software.informer.com/Stories/best-secure-instant-messengers-in-2017.html
There’s also the issue of those messengers working with cloud and Google docs
https://droidinformer.org/Stories/beware-of-google-docs-invites-it-could-be-a-phishing-scam.html
Instane messaging is not suited for document sharing for now, so it’s a loophole that actually needs closing. I wonder if it’s one of the future developments.

If the service can see from who sending whom, metadata is not protected.

To which exact part are you referring?