Snapchat. One of those revolutionary apps that made an undeniable impact on the market. And, for a good reason. Firstly introduced as iOS exclusive, later take a major role within Android, too. And suddenly, it started declining to levels that make it almost unusable. Not for iOS, though. There is still a top-notch app if it’s to believe to reports. Until it cracks.

Even Android users are praising Snapchat, but that demographic is mostly covered with flagship users. The ones with the handsets that pack a little less punch are overwhelmed by all kinds of issues. One that’s hard to skip on is related to frequent crashes and lags. Most of those come due to a bad optimization, but some might be inflicted by other reasons.

For that purpose, we advise you to check our list that of workarounds. We prepared some possible solutions for your Snapchat ache. If you have had a hard time with crashes, make sure to track the steps below.

How to resolve Snapchat stutters and crashes on Android

Let’s start with the acknowledged route. Cache and data are there for a reason. Data is, obviously, everything you or app itself stores on the internal storage. In this case, photos, chat history and similar content. Cache, on the other hand, is there to speed app’s loading time. Both are important and both, sadly, can sometimes cause issues. With such a badly optimized app like Snapchat for Android, this might be a long shot. However, it won’t cost you anything to give it a try.

Follow the instructions below to clear both Data and Cache from the Snapchat app:

After that, you might need to sign in again with your credentials. If nothing changed and Snapchat still crashes, move through the additional steps.

Now, besides the standard cache stored on internal storage of your device, there’s the in-app cache. In there, app backups some of the essential files, with the main purpose to decrease the loading time and grant you more seamless use of available features. Not all apps have this function, but most instant messengers or similar apps do.

In order to clear the cache from Snapchat, follow the steps below:

Try using the app again. If it lags or crashes, you can be certain that the problem is still there.

When it comes to Snapchat on Android, you must be aware that even the Snapchat developers said that they’re more iOS-oriented. That’s where the optimization comes into play. Certain high-end Android handsets won’t have any issues, while users with the low-end or just older devices will have a hard time using it.

For all avid users, the expectations last from patch to patch, but, until now, there’s only so much the devs have done to improve the app’s stability. They indeed add new features, but it seems like the overall usability is still a major downside.

However, since we can never know what they’ll address in the future, it’s always well-recommended to keep your app up to date.

If this somehow prevents Snapchat from crashing, then we apologize to uncalled critics against Snapchat. If that’s not the case, well, you better check out the remaining steps we enlisted.

Even though the Android platform is much more homogenous nowadays, system update or structural changes within the system can affect the behavior of certain apps. And if an app is in a state in which is Snapchat currently, nothing should surprise you. The reinstallation is one way to address this. It functions similarly as it would on PC. An app is installed, certain permissions are granted, and suddenly it starts misbehaving. Renewing it might be useful. 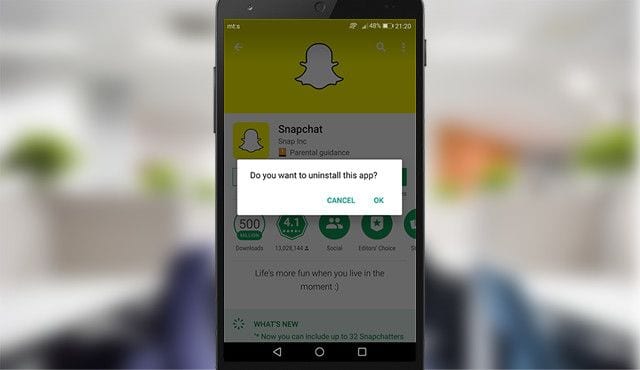 If the current, or even the latest few versions were causing issues, you can always downgrade by downloading the older, well-performing version. This procedure isn’t as simple as roaming through Play Store, but it might help you overcome the current issues you’re facing. Snapchat used to work better, and, if you can remember the version that suited your device best, you should grasp it. Luckily, some good folks from APK Mirror stored the majority of previous Snapchat versions. You might lack some lately introduced features, but, at least, you won’t experience crashes, lagging and debilitating performance drops.

Follow the instructions below to download and install the older APK version of Snapchat on your Android device:

Finally, if you’re not keen to switch your daily driver for some high-end flagship or iPhone, your options are limited. The best thing about Android apps should be their optimization for older and a bit outdated devices. Snap Inc. is obviously not following that policy. As one Reddit users said in the dedicated subreddit, in regards to future improvements:

‘‘We can only hope, but I have no expectations. I had problems with Snapchat years ago, but tried it again the last month or so. Eventually I had to uninstall again.

The app is worse than ever. I’m on a 5x and it was slow, significant delays to button presses, recording video would freeze for several seconds, etc. My phone also started to seemingly lock up (screen would not turn on, holding power would not boot, required a reset by holding buttons). At first I thought this was just a Nexus 5x issue but since uninstalling it hasn’t happened. The Instagram app is such a pleasure to use in comparison.

The app is garbage, it has been for years, and I’m not sure why they would fix it now if they haven’t already. The company is a mess, just look at the stock.”

If you agree, maybe it’s time to switch focus to apps that are, in comparison to Snapchat, getting better and better. It’s your decision, but, as the time pass, it seems that the Snapchat, a once favored instant messenger, is slowly declining. Even Facebook Messenger won’t crash as often, and Instagram is already far away in the concept of sheer social messaging, photos, videos, and even stories.

That’s just opinion. What’s yours? Are you satisfied with what Snapchat has to offer? Have you experienced crashes or other issues with the app?

Don’t forget to tell us in the comments section below. Thanks for reading and have a good day.