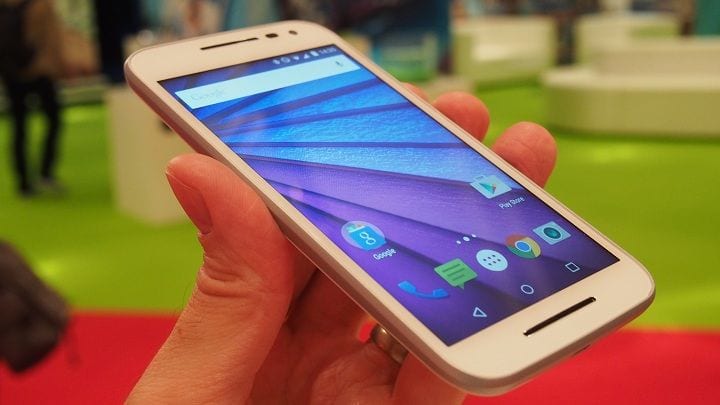 Since the introduction of its first generation back in 2014, Motorola Moto series proved as one of the most popular, affordable Android-powered handsets. With just everything that an average smartphone user needs, followed by slick design, quite clean stock Android, and solid all-around performance. The trend continued through third, fourth, fifth and, finally, the sixth generation.

However, just like some other renowned OEM’s, certain production series of Motorola Moto had issues that are hard to overlook. Have in mind that these are isolated cases, but that doesn’t make them less serious. Namely, more than few users had reported issues with sudden shutdowns on their Moto G3.

In order to help you, we enlisted a few workarounds. If you have had a hard time with your Moto G3 (3rd gen), check the steps below.

How to fix constant shutdowns on Moto G (3rd generation)

If you’re positive that the hardware isn’t malfunctioning, a system update is a first step you should take when it comes to a software troubleshooting. Some users reported that the issue emerged immediately after the update. Luckily, due to frequent updates, some carriers and Motorola itself provided fix after some time. So, even though updates can break (or even brick) certain handsets, they can also (as they are supposed to do) repair emerging issues. Either way, records say that the best performance is noticed after updating to Android 6.0 Marshmallow.

Even though this is a rare occurrence, certain 3rd-party apps can be the cause of the problem at hand. Most of the time they cause performance drops, lags or similar issues. Nothing as drastic as sudden shutdown or restart. But, it’s software and sometimes and you can’t be a 100 per cent sure. For that purpose, we advise you to take a Safe mode as a diagnostic step. Instructions below will inform you how:

However, if your Moto power off on its own while in the Safe Mode, move on to additional steps.

Another workaround that is applicable to similar issues is wiping out of cache partition. As you probably know, cache partition is part of internal storage that keeps temporary files that regulate system processes. If there’s a corruption of some kind within the cache partition, it can certainly affect your phone’s performance. You don’t need to worry about your data since this procedure doesn’t affect it.

If even this isn’t an adequate solution for the problem, we advise you to keep your calm and move to additional steps below.

Some users pointed out the battery as the main suspect for sudden reboots. Now, there’s only so much you can do once the battery shows the signs of malfunction. Besides replacing it, obviously. However, things got strange for certain users who have had acquired new batteries and still experienced issues.

So, in that scenario (and we still can’t be sure), the problem lies in either malfunctioning hardware or the software that’s in charge of battery readings. There’s only so much one can do when it comes to hardware, but you can take a shot at battery recalibration. What is that? Well, occasionally, the battery and system are on the wrong terms due to false readings, By recalibrating the battery, you might resolve that problem. It’s not advised to do it too often (once per 6 months) but it’s worth a try.

Follow the instructions below to recalibrate battery on your Moto:

In addition, we advise you to use either original charger or any charger that is rated at 500mA and 1.5A.

Finally, if none of the previous steps helped you, the only remaining solution is factory reset. Most of the technicians will say that this won’t help and that’s this hardware fault. And, most of the time, they’ll be right. However, it’s worth a shot and, with it, you can finally be sure that the hardware is the problem. Don’t forget to backup your data before the procedure starts, since this will wipe out everything from the device storage. That includes an external SD, as well.

After that, your phone will restart restored to factory values. If, after that, the problem is still present, you should contact service or carrier. Don’t forget to share with them all troubleshooting steps you took.

With that, we can wrap it up. In case you have any questions, suggestions or remarks, make sure to share them with us in the comments below. Have a nice day and thanks for reading.