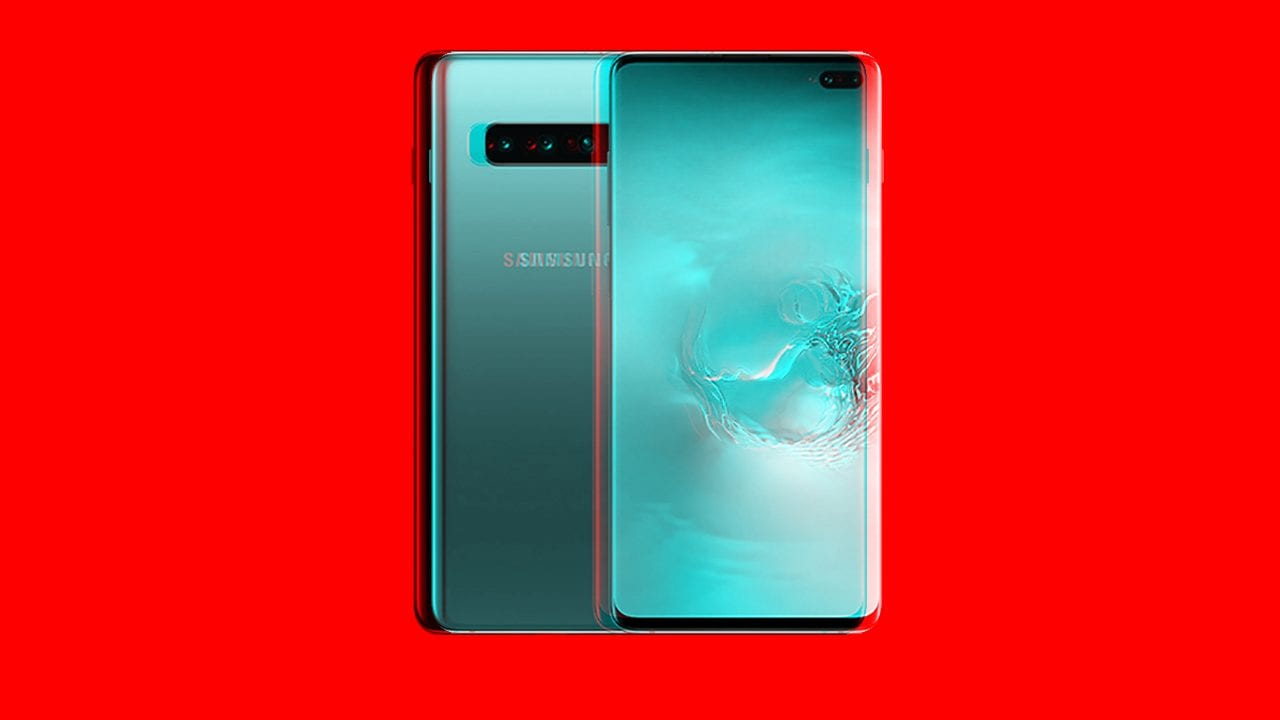 So, you got yourself the brand new Samsung Galaxy S10? Congratulations, you now own the best and perhaps most complete smartphone to date! It’s amazing what this device has to offer. World-class performance, great camera, beautiful design, you name it. But all of that comes with a hefty price.

And when you pay that much for a phone, you expect it to fly, literally. Unfortunately, the reality is different, and even a beast like the S10 can stutter sometimes. I know even the smallest lag or flaw can completely ruin the vibe of owning this technological masterpiece, but you have to deal with it, nevertheless.

To make things easier for you, I was on the hunt for the reported Galaxy S10 issues. So, if you’re affected by any of the following problems, I hope you’ll find the right solution here.

The revolutionary ultrasonic fingerprint scanner is one of this phone’s highlight features. On paper, it should work flawlessly, but it’s still the first generation. And the first generation of just about anything is not exactly the most polished one.

But despite being the pioneer of the ultrasonic fingerprint technology, the S10’s fingerprint reader holds up well. However, there are still some delays in responsiveness, which annoy users who encounter them.

The general opinion about the S10’s camera is mainly positive. It sits at the top of the pyramid of today’s smartphone cameras, although it’s still not the best one, especially with the Huawei P30 Pro in the market now. But all in all, the Galaxy S10 delivers a camera you would expect to find in such a premium device.

However, there are complaints from users unsatisfied with the end result. Namely, people have been reporting for some time now that pictures often turn blurry, as the phone fails to focus on the right point.

As the Galaxy S10 boasts a very advanced camera (and the software that makes it work), there are numerous settings that can drastically improve the quality of pictures, but also make them worse. Because of that, it’s recommended to switch off some settings, to get better results. The particular settings I’m talking about are Flaw Detection and Scene Optimizer. So, go to your camera’s settings, and disable these two options. Hopefully, you’ll be able to capture sharper images.

Another way of improving the quality of photos on your Samsung Galaxy S10 is by using a Google Camera port for the S10. Good folks from the XDA Developers were quick enough to develop this port, and it’s now available for free and doesn’t require the root access! Because, you know Google’s an absolute champion in developing image-processing software, and you can take the full advantage of that.

Note: I’ll write the full guide on how to use the Google Camera port on the Galaxy S10 as soon as possible, so stay tuned.

I’ve found none serious display problems. Which was more or less expected, since Samsung manufactures the industry-best displays. However, there’s one individual case, which may or may not bother anyone else.

Namely, one user reported that his screen turns black and white upon unlocking. This is caused by the Wind Down feature of Google’s Digital Wellbeing app. So, the obvious solution is to turn off this feature inside the Digital Wellbeing app, and the screen should go back to normal. 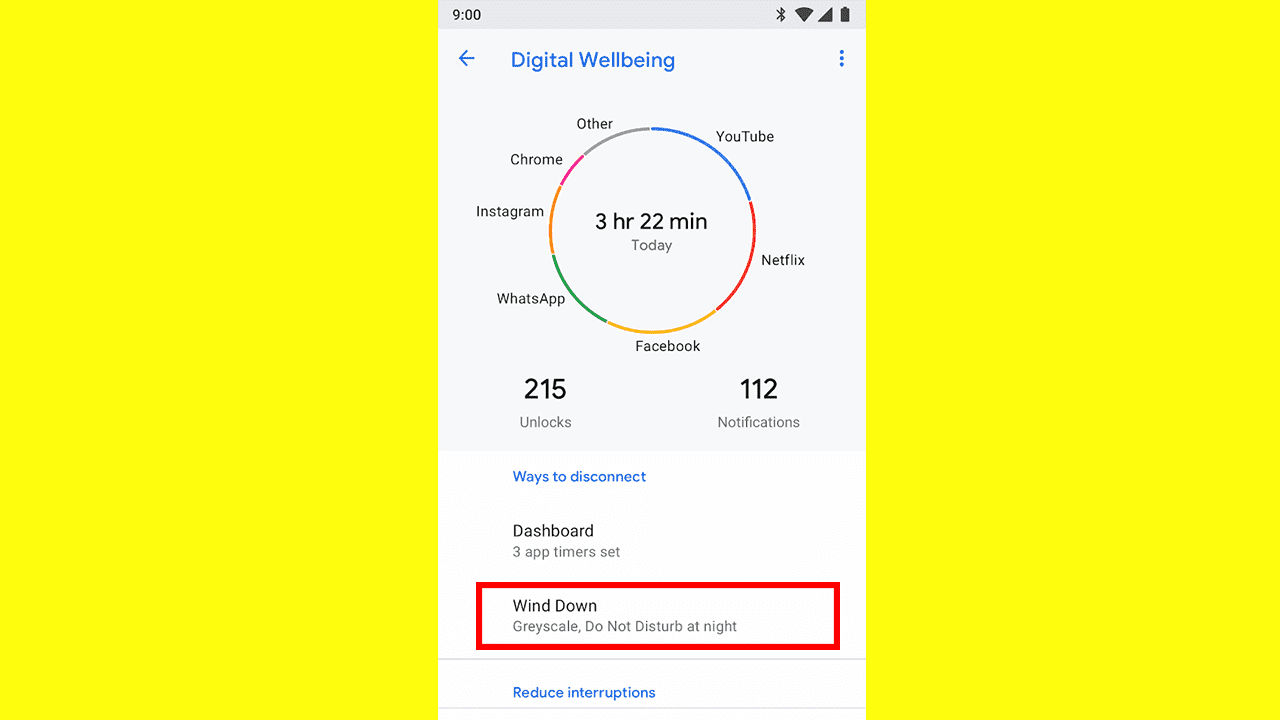 Samsung Galaxy S10 is the first non-Google device that ships with the Digital Wellbeing app, so this feature could cause the screen issues without you even knowing and paying attention to it.

A few users reported that the screen looks yellowish. Now, this could be because of the Blue Light Filter option, which, as its name says, disables the blue light to make the screen more pleasant to look at.

This can be easily resolved by disabling the Blue Light Filter, and setting the screen to Natural in the display options.

I should also mention that Samsung intentionally made the S10’s screen “less blue”. So, even if the display is in the Natural mode, it will appear more yellow compared to previous Galaxy S devices.

Sure, turning off the Blue Light Filter can resolve the Yellow screen problem, but what if you can’t turn it off? And that’s exactly what a few users reported.

Apparently, this happens when a backup of a non-Samsung phone (most commonly the Pixel 2/3) is restored. Samsung integrated its own Blue Light Filter into One UI and removed the stock one. So, when you restore a Pixel backup, you bring your old Blue Light settings, and the filter stays on no matter what you do.

The solution for this is to remove the Blue Light Filter settings on your old phone, create a new backup, and set up the S10 once again. But I imagine that’s too much hassle, especially if you’ve been using your new phone for a while. So, another thing you can try is using the Activity Launcher to initiate the activity linked to the night shift feature that will reset the settings, as explained on the XDA forums.

Video playback on Instagram, Facebook, and other platforms seems to be poor for some users. Namely, the video appears pixelated, even if its native resolution is high.

There’s no known solution for this issue at the moment. I can recommend you to try generic troubleshooting steps, like checking your internet connection or disabling the Data Saver. However, I can’t be positive any of that will be helpful.

If the exact solution appears somewhere, I’ll update the article as soon as possible.

Just like it’s the case with many other phones, it looks like the Bluetooth issues haven’t bypassed the S10 either. Users are complaining about all sorts of Bluetooth-related issues. Whether it’s the car, Bluetooth speakers, headphones, etc.

Unfortunately, there’s no specific solution for any of the Bluetooth issues, yet. It looks like users experiencing these problems will have to wait for Samsung to release a patching update.

I can once again tell you to try some generic solutions like Resetting the network settings, disabling WiFi and re-syncing, but I’m not sure if any of these solutions will be fruitful.

The consensus on the Galaxy S10’s battery life is positive. Sure, the battery capacity could be bigger, but people are mainly satisfied with it. However, there are still individual cases where users encounter problems.

As the battery drain is such a broad term, and millions of things can affect the battery life, I can’t precisely tell what’s causing the problem for you. It could be the Always-on display, the fingerprint sensor, or some other feature or service. All in all, the Galaxy S10 is packed with potential battery vampires that will suck a good portion out of the battery if not put under control.

1. Turn off (modify) the Always On Display feature

Sure, the Always On Display is a great feature that eliminates the need to wake up your phone when checking time, for example. But it’s also a known battery drainer. Not a major one tho, but it will still consume up to 10% of the battery on a daily basis. So, if that makes a difference, you can disable this feature, or at least modify it.

Here’s how to disable Always On Display: 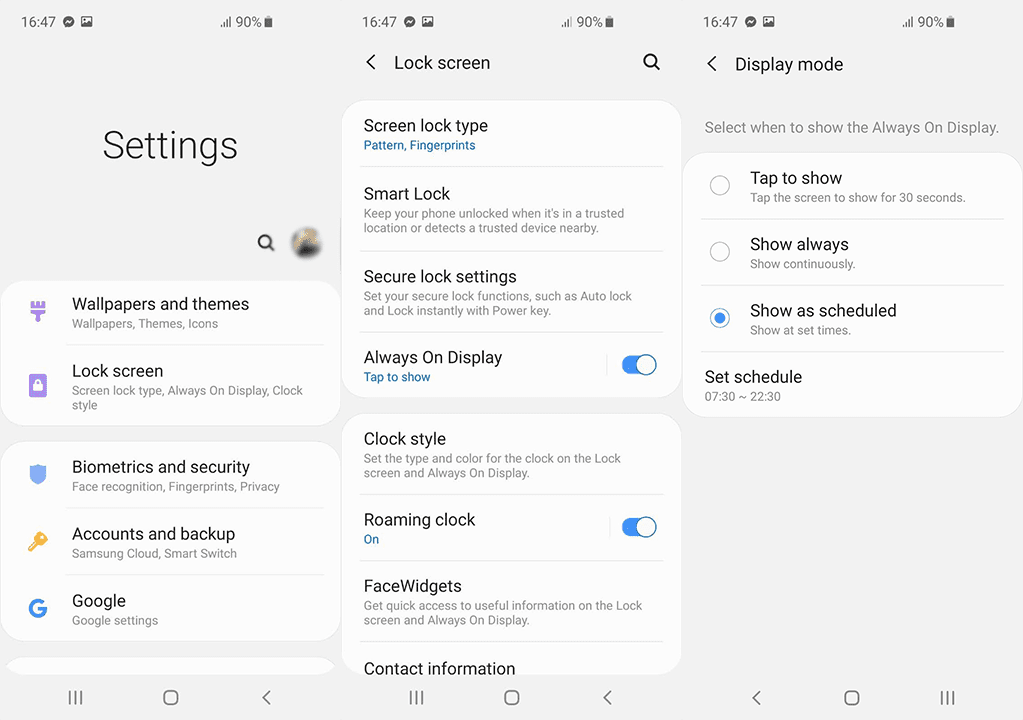 Now that the Always On Display is always off, you don’t have to worry about potential battery drains anymore. However, if you’re used to this feature, you don’t have to turn it completely off to save battery. Instead, adjust it to meet your needs and still curtail energy expenditure.

There are two additional options next to turning off Always On Display, and these are Tap to show and Show as scheduled. I don’t have to explain what does the Tap to show option do (the screen stays on for 30 seconds after each tap), while the Show as scheduled allows you to set a schedule for when you want to use Always On display, and the feature will only work during the selected time frame.

Uninstalling apps which drain more battery than they should is one of the most cliché solutions you can try. But it’s effective. Especially if you’ve set up a backup from your previous phone, which probably brought apps you don’t even know are there.

To determine which apps drain the battery the most, check the Battery usage feature, and you’ll get the idea. The next step, of course, is to uninstall the battery-thirsty app, or at least limit its power consumption (depending on the app). 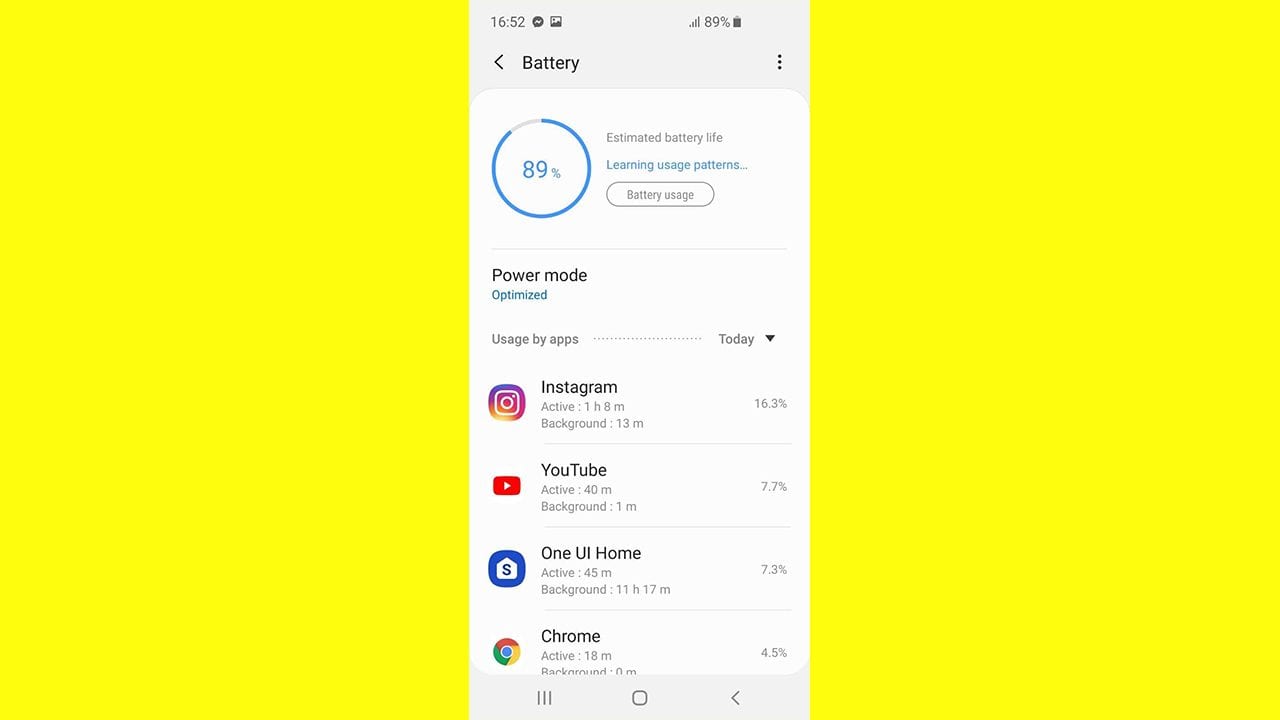 3. Set up the Power Saving mode

n case you can’t determine the exact cause of the battery drain problem, enable the Power Saving mode. As you might’ve expected, this feature will save tremendous amounts of battery, but will also limit the phone’s performance. You can choose between multiple power-saving options, depending on how much consumption you want to cut.

Obviously, the maximum power saving mode will significantly improve the battery life, but it will also cripple the abilities of your phone to the point it’ll only be able to perform basic functions. So, we will aim for the medium mode here, which will save some battery, but won’t drastically affect performance. 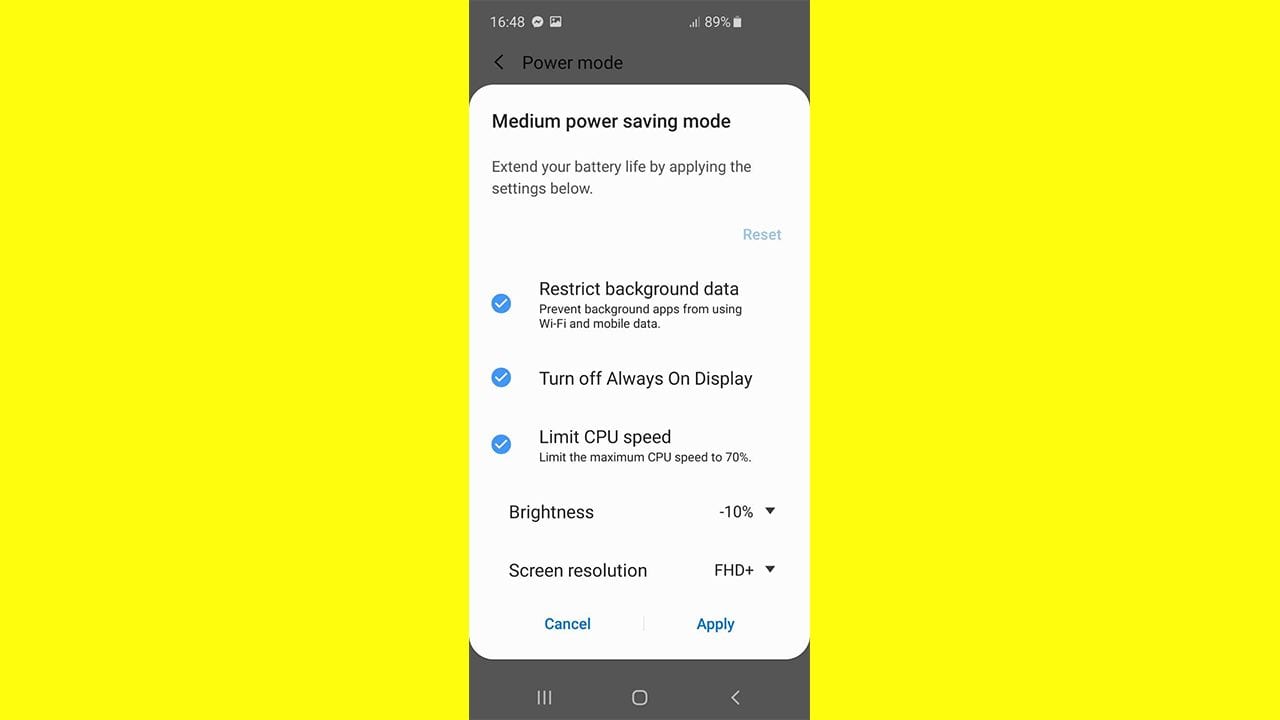 According to a few users, certain Galaxy S10 phones have a cellular signal/data problems. Users cannot use the cellular data, or make calls and send messages. As the number of complaints raised recently, Samsung acknowledged the problem and released a patch.

So, if you’re still experiencing problems with your cellular signal, just update your phone, and it should resolve the problem.

The Galaxy S10 has a headphone jack! The company didn’t stray away from its original principle of keeping both sides of the jack debate happy. But Bluetooth earbuds are popular, and are now the premier choice for many users, especially with the Galaxy Buds in the play.

And that’s where problems may arise, as a few users reported bad audio quality when using their Bluetooth earbuds or speakers with the Galaxy S10. Since the S10 is a well-made phone, that shouldn’t allow technical issues like this, the problem most likely lays in your Bluetooth settings

It’s probably a codec problem, because not all codecs are created equally. If you’re not familiar with the way Bluetooth codecs work, check out this article, because there’s no need to dig into the details here.

If you’re experiencing the drop in sound quality from your Bluetooth device, check if you’re using the right codec.

To change the default Bluetooth codec, you first need to enable the Developer Options. Here’s how to do that:

Now, that you’re “a developer”, it’s time to change your Bluetooth codec. Most phones use the SBC codec by default, which is now outdated, and you should switch to the aptX codec for better audio quality. Here’s how to do that:

After changing the default audio codec to aptX HD, the sound quality should improve. However, the quality of your Bluetooth earbuds also matters, as you can’t expect wonders from a cheap pair of earbuds you bought on Amazon past Black Friday. So, keep that in mind, as well.

That’s about it. As you can see, even the Galaxy S10 has its flaws, which proves the theory that nothing’s perfect. Even if it costs that much. I hope this article helped you resolve your problem with the Galaxy S10. If you’ve encountered an issue, I didn’t mention in this article, feel free to write it down in the comments below.