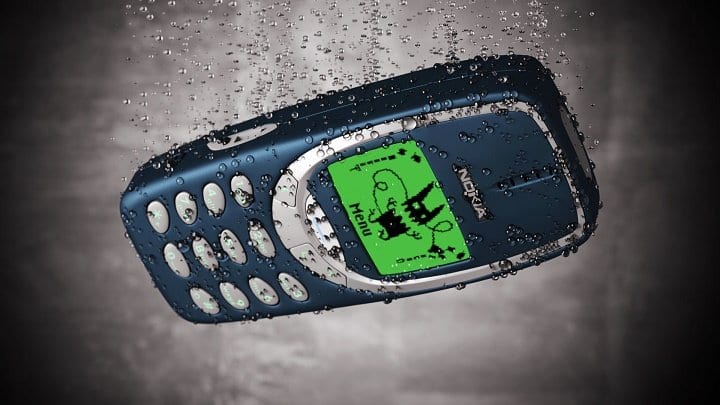 Reasonably, it’s quite a short list. But, endurance must be at the top of that list. Everybody heard for the cult surrounding Nokia 3310 and it’s peers. Those ones were simple but sturdy. You could hit the wall with the 3310 and be scared for the wall’s safety. Because the phone would easily prevail.

Yes, we have Gorilla Glass or Saphire but there is so much they can do. Luckily, the manufacturers saw the opportunity and took it one step forward. If you are a bit clumsy or keen to use your handheld device as a multifunctional weapon, we prepared a list of 7 Android phones that proved themselves as a worthy acquisition. 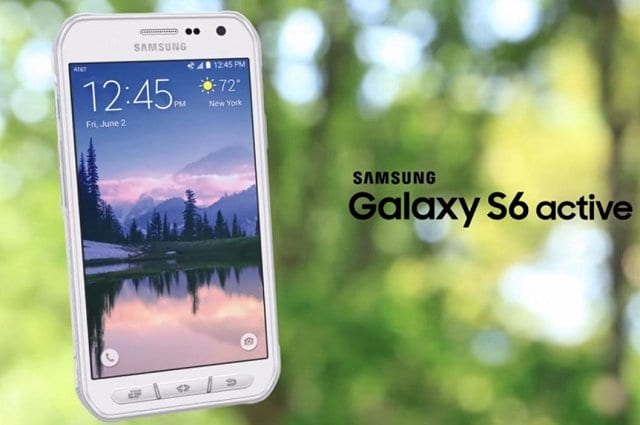 Samsung emerged as one of the leaders in smartphone manufacturing. They offer both reliable budget phones and high-end flagship devices. But our focus today is less on functionality and more one sturdiness. And Galaxy Active series are at the top of the food chain in those regards.

First on the list is Galaxy S6 Active. The phone was introduced back in the 2015 and it managed to establish itself as a go-to flagship device with remarkable endurance. With Corning Gorilla Glass 4 and all kind of resistance features. Namely, it provides you with resistance to dust, salt, rain, solar radiation and thermal shocks. Additionally, it is water-resistant to 5 ft (1.5 m) and can withstand in water for 30 minutes. Moreover, you won’t need any external protection to preserve it from damage. Even though additional protection can always come in handy.

Except for the obvious sturdiness, this phone is an upgrade over already great Galaxy S6. The battery is amazing (non-removable, sadly). The plastic casing is much better for heat reduction in comparing to a metal casing. If the lack of fingerprint scanner and disputable aesthetics are not a game-breaker for you, this phone is a viable solution for you. At least it won’t crack in your back pocket. 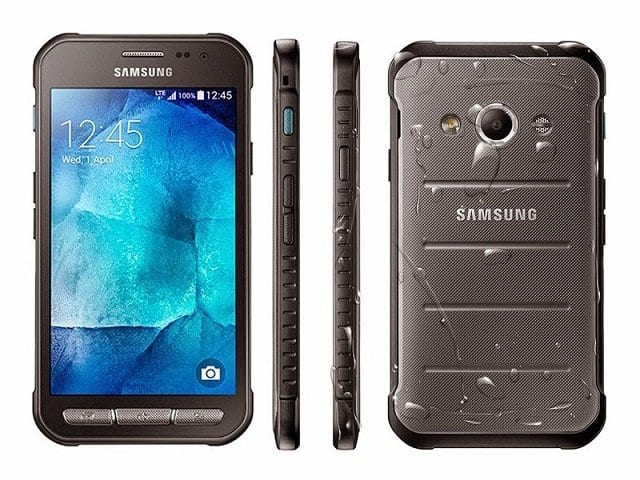 Same as its predecessor, Galaxy S7 Active was presented with better-known S7 and S7 Edge. And just same as S6 Active, it utilizes high-end features with amazing sturdiness. Basically, Samsung just took on the same concept and improved it for customers around the world.

The certified resistance measures stayed the same: you can toss it in 5 ft of water and take it can last up to 30 minutes. Corning Gorilla Screen 4 that has two layers instead of one. That way your phone is, as Samsung claims, much safer from possible screen damage. In addition, it is just as well all other hardy features, like resistance to dust, salt, and other exterior effects.

When it comes to performance, the gap with S7 and S7 Edge is reduced. The fingerprint scanner is available with Samsung Pay addition. The ‘Active’ button, specific for this Samsung series is even better utilized as a shortcut to selected apps. Moreover, the battery is a monster in its class. The drawbacks? Well, it is still larger and heavier than its standard counterparts. And, sadly, it doesn’t support VR. 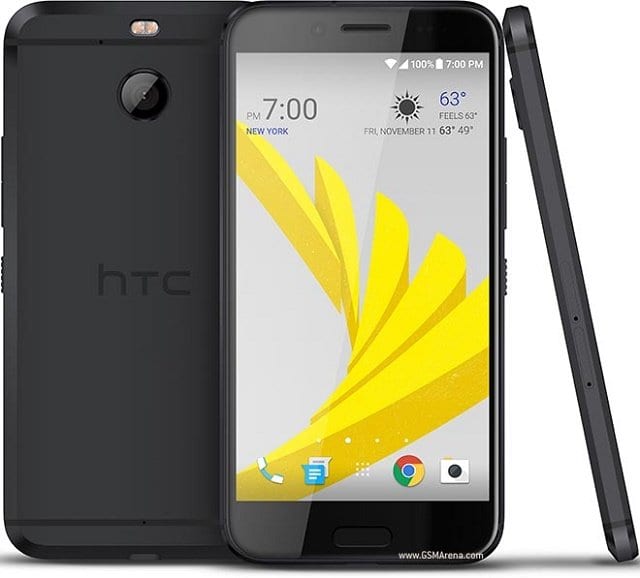 HTC is well-known for the large specter of well-balanced Android devices. As the case is with all big manufacturers, they also vastly improved resistibility of their phones. HTC Bolt (US) and HTC 10 evo (worldwide)  are the synonyms for sturdiness, style, and great performance. Both models were introduced in November of 2016 and they are almost the same. The most noticeable difference is the presence of a 3.5 mm audio jack on Bolt, that is not available on HTC 10 evo.

Both devices are heavily rugged with Corning Gorilla Screen 5 (last generation) and full-metal unibody cases. That makes these phones crash-prove in most of the situations. Additionally, the phones are highly watering resistible. You can place them in the 1-meter deep water for up to 30 minutes. All of the standard protection is there so the dust and exterior effects shouldn’t cause any problems.

Performance-wise this dynamic duo is in the elite league with brilliant, stylish design and amazing screen and camera. In all manners, it is similar to other flagship models. 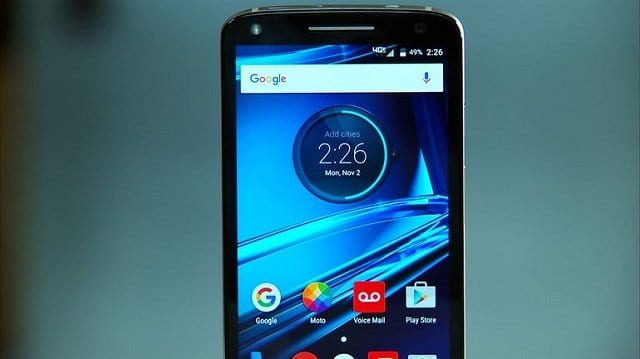 Motorola Droid Turbo 2 is the device with one of the most resistant displays you can think of. It is practically indestructible and fully shatterproof. Motorola presented this phone back in 2015 and, even though it is not a novelty anymore, it is still a viable option. If not for any other reason, then because of its sturdiness.

As we already mentioned, with this device Motorola implemented special Moto ShatterShield. The display is protected with 5 layers. Every layer has its purpose and all of them work in one favor – to protect your display from any damage. There are multiple tests online with different torture methods. The Droid prevails most of the time, only failing in ultimate tests. Since those are extreme conditions, and uncountable for the everyday use, the phone should do just fine.

Moreover, the screens endurance is not the sole good thing about Droid Turbo 2. The performs well and it is planned for an upgrade to Nougat 7.0. That should tell you enough about its hardware capabilities. Additionally, the 21 MP camera is one of the best in the market. 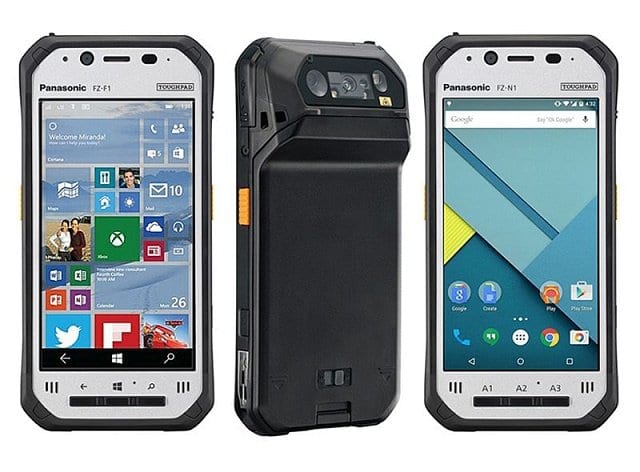 First 4 phones we listed are quite similar with others in their category. They are just enhanced for better protection. Next phone in our list is not created for everyday use, nor for everyday customers. It is Panasonic’s answer to a narrow but demanding market: specific work surroundings. This phone (or more tablet, on which Panasonic insists) is 3-in-1:

Jokes aside, the main use of this amazing device, besides standard smartphone features, is a utilization of well-placed barcode reader. So, its preferred surroundings are warehouses. Nevertheless, since the hardware-wise Toughpad is not remarkable, it’s tough (you would expect that from TOUGHpad) and packs a battery with amazing 6200 mAh.

The phone is covered with the hard rubber casing that will prevent damage from falls or the dust, with water resistance up to 4 meters for 30 minutes. The main difference between this and other similar devices is battery life. Toughpad offers the optional battery with 6200 mAh that can make the phone running for days. But, it is hard to imagine using this phone anywhere but for work. 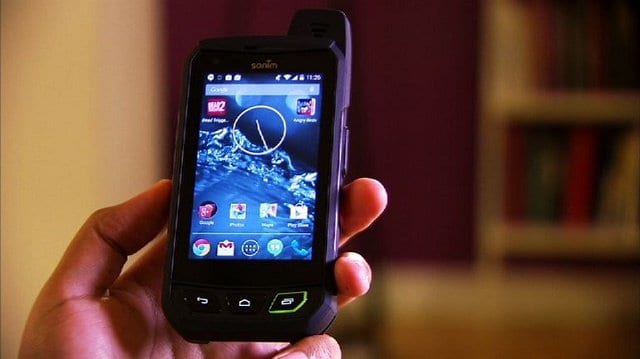 We will continue in the same manner. Sonim XP7 is another android-powered rugged device worth acquiring for professional use. The phone, as you would expect, isn’t feature packed as some standard smartphones. Sonim is a company known for reliable solutions in ultra-rugged category and XP7 is their latest addition.

What differentiates it from it peers is small size. That makes it much better for everyday use. But, don’t let the size trick you into thinking that XP7 is not hardy. It is as tough as nails. The main protection for the phone is resistant rubber armor and improved Gorilla Glass 2. That makes this phone completely resistant to falls from formidable heights, dust, moderate heat and other hazardous environmental effects. You can run it over with truck and place in 5 ft deep water for 30 minutes. It will work like a charm, regardless.

Even though it is running on stock KitKat 4.4.2, the phone is quite stable with rare bugs that occur from time to time. The distinctive features are an antenna-like speaker that brings amazing sound and battery with great 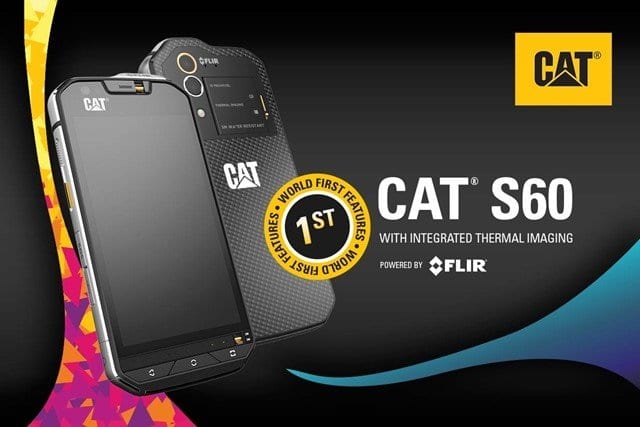 What is your first association when someone mentions rugged phones for extreme conditions? Ours is Caterpillar. The company that is one of the leaders in creating sturdy heavy machinery and clothes, is more than few years present in technology innovations. And their go-to device must be the latest addition, CAT S60.

With all Android phones, you can find certain similarities but S60 is a category on its own. In the specific niche. Namely, the phone is made to last whatever the conditions. It can last in 16 ft ( 5 meters) deep water for up to an hour. It is completely protected from falling or pressuring. Additionally, the dust, dirt, shock and other hazardous exterior effects can’t touch it. The display is protected with Corning Gorilla Glass 4. Both main (13 MP) and front (5 MP) camera can be used underwater for both selfies and adventuristic photos of the sea world.

Hardware-wise, S60 is not known for amazing configuration. However, even though the processor is underpowered and the display is not remarkable, it should work out just fine for most of the users. The most distinctive feature of S60 is thermal imaging. This is the first device that implements thermal vision in camera.

This phone is not comparable to most of the Android devices, but it has its specific features and is designed for specific use. To be fair, this device is pricey and you can find affordable phones with better specs. However, if your professional environment demands endurable phone or you are an extreme sports enthusiast, S60 will serve you good.

This was our list of indestructible phones. You ‘ll see that few of them are for everyday use and others for specific conditions. But all of them share manufacturers idea to give their costumers enhanced protection over standard models. Do you have some additions to our list? Tell us in the comments.