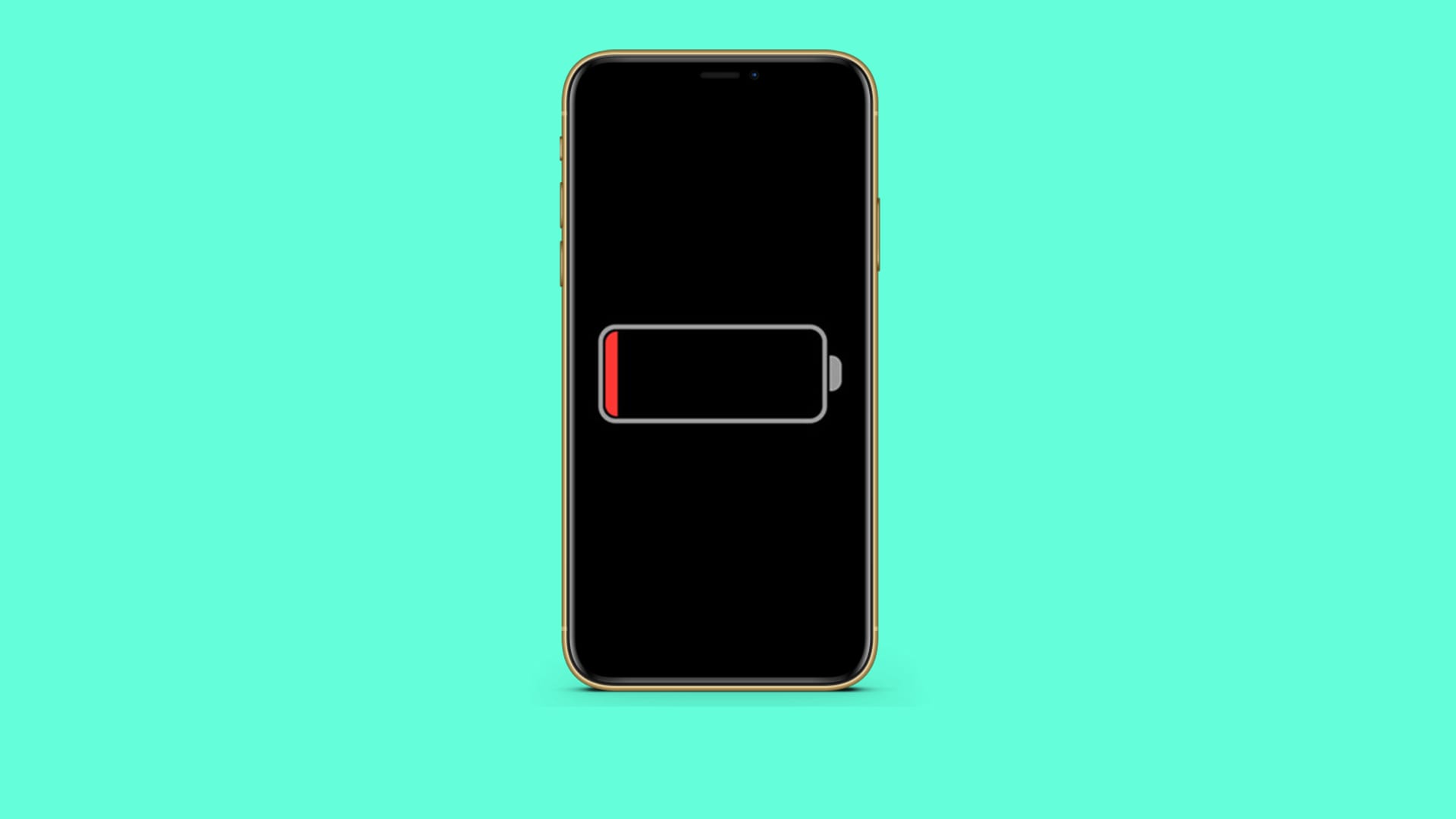 And while most users love the new options, there are still those who aren’t excited about iOS 14. Mostly because they had some needless problems caused by the latest update.

The battery drain is one of the most frequent issues. Social media sites and multiple forums on iOS 14 are currently flooded with reports of poor battery life. If you’ve also noticed the decrease, I’m sure you’ll want to get things back to normal, or at least grasp what’s going on better. So, here we’ll try to clarify the situation and maybe find a viable solution.

As ZDNet’s Adrian Kingsley-Hughes points out, the worse battery life on a freshly-installed OS is more a rule than an exception. When you install a big update, like iOS 14, your phone has to do a lot of background work to get everything in order.

First, there’s battery calibration and indexing. These processes use more battery on their own, so that’s when the “initial” drain will probably happen. On top of that, a recalibrated battery can give you the impression that it drains faster when in reality it doesn’t.

Then, there are all those pending app updates. A new major iOS version is also a big thing for developers who’ve been improving their apps to work better with iOS 14. So naturally, most of your apps will receive updates within a few days of installing the new OS.

And, of course, the most probable reason for bad battery life on your iPhone: Bugs. We already know that the release of iOS 14 was a bit hurried by Apple, which led to all kinds of problems. First of all, there’s possibly something that triggers battery drainage within the iOS 14 code. On top of that, as developers didn’t have enough time to polish their apps, your iPhone’s battery life could also be shortened by an unoptimized third-party app.

So, with all these factors in mind, is there anything you can do to deal with the draining battery? Well, not so much. You can either sit and wait for Apple to release a fixing update or delete an app you assume consumes more power than usual (we’ll talk about it in a bit).

In the meantime, there are a few workarounds that will not fix the battery draining issue per se, but will at least give you some control over your iPhone’s power usage, so waiting for that sanative update won’t be as hard.

The signature battery-saving feature of the iPhone is its Low Power Mode. As you can tell from its name, when you enable this mode, your phone pauses all the battery-consuming background processes, like updating apps, syncing to iCloud, Background App Refresh, etc. By putting all these tasks on hold the phone consumes less power, hence the name.

By default, you’ll get the prompt to enable Low Power mode each time your battery percentage goes below 20%. But you can also manually activate it at any time, and your phone will remain in this “state” until you turn it back off, or until the battery percentage reaches at least 80% when charging.

To turn Low Power mode on go to Settings > Battery, and toggle the Low Power Mode option on. 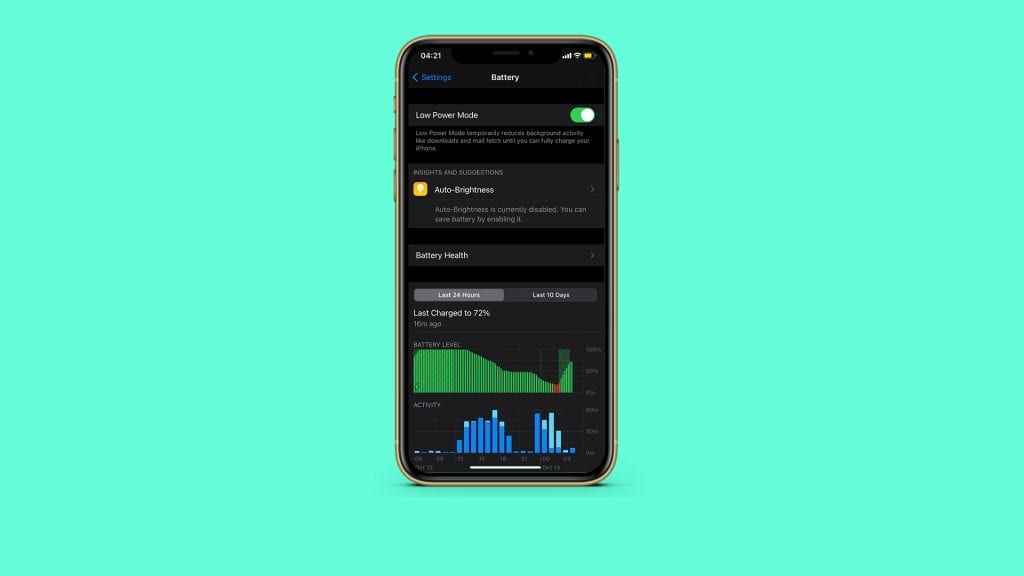 Now, I know keeping Low Power mode constantly on can be frustrating (I personally find it very annoying), because your iPhone won’t be able to perform some basic functions, but it should theoretically extend your daily mileage until the fix arrives.

You’d be surprised to learn how many apps installed on your phone actually want to know your location. And to do so, each app needs to interact with iPhone’s Location Services, which is battery-consuming.

We’re not talking privacy here, but you should keep those apps in check for technical reasons, as well. While you probably won’t notice any difference when the battery situation is “normal”, keeping the Location Services usage in check could be very helpful in times like this.

IOS has made it so simple, easy, and even aesthetically stunning to use apps on the iPhone that we barely pay attention to what’s going on in the background. And we’re not supposed to, that’s the whole point of it. Apple’s job is to take care of the technicalities, yours is just to enjoy the end product.

But if you take the extra step and look under the hood (as much as Apple allows it), you could find some extra insight into how you use your apps. Of course, I’m talking, of course, about an app that could eat up your battery without you even knowing it. This is especially possible in the early days of a new iOS, since not every app has been updated to work seamlessly on the latest version.

But you use so many apps, how can you figure out which app uses more power than it should and whether that app even exists? Well, there’s no direct way, but you can use iOS battery reporting to get the closest idea.

Go to Settings > Battery. On this page, you’ll get detailed reports of your battery use for up to 10 days back. The best thing about this report is that it gives you battery usage by app, which is essential for our little investigation. Go through the list of apps carefully to see if you can find one that uses more battery than it does usually. If you identify such an app, your best bet is probably to delete that app and wait for its developer to deliver an updated version that won’t drain the battery on iOS 14. 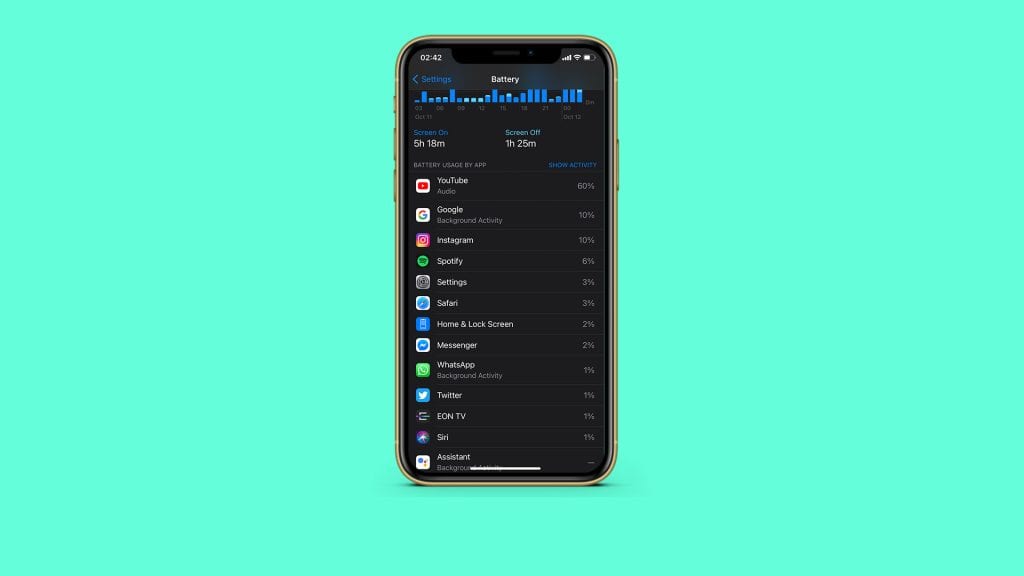 Tip: Pay special attention to the background activity of apps. If an app constantly does something in the background, it’s probably a good idea to remove it for some time.

As the name suggests, Background App Refresh is a feature that allows apps, even if you are not actually using them, to update and search for new content. This makes for a smooth experience, as you don’t have to wait for an app to load every time you switch back to it.

But as convenient as this feature is, it still consumes battery. A tiny chunk tho, but it might be noticeable when your battery life isn’t at its best. So, you can turn off this feature and see if the battery improves.

The obvious downside here is that you can’t seamlessly slide through apps anymore, as you’ll have to wait for each app to load new content. This will slightly slow you down and your iPhone won’t feel as fast, but the battery should last longer.

Here’s how to disable Background App Refresh in iOS 14:

Widgets are the biggest star of iOS 14. I’m almost positive most of you were caught by the “Home Screen fever” that has begun ravaging millions of iPhones starting September 16. I would’ve never thought that something as trivial as organizing Home Screen could turn into a legit competition for who’s going to be the most creative when arranging icons and widgets.

By the way, if you’ve created your own little piece of art on your Home Screen, feel free to share it with us in the comments, a lot of people would probably love to steal your ideas.

But, all the hype and creative work aside, there may be some widgets that are doing you more harm than good. At least for now. I keep blabbing about how Apple rushed iOS 14, leaving developers with little to no time to optimize their apps. Well, it’s possible that a certain app on your phone hasn’t been properly updated, which makes it, for example, eat more battery than it should. It’s unlikely, but still possible.

The only way you come close to finding out if that’s indeed the case is to get to the battery report (as shown in Solution 3). Once again, go through the list of apps and see if any of them is using an unusual amount of battery. If a widget of that app appears to be on your Home Screen maybe you found the culprit. So, perhaps instead of completely uninstalling that app, removing its widget form Home Screen would be enough. Just experiment and see what happens.

That would be all for our little investigation. I hope at least one of these tips will help you preserve some battery life. Until Apple gets its act together and delivers that fixing update, which is probably the only real solution to the battery draining problem. That can happen tomorrow or in a few months. We never know, so it’s a good idea to give your battery some remedy in the meantime.

You’ll probably sacrifice a feature or your iPhone’s signature smooth performance, but at least you won’t find it out of juice in the middle of your workday.