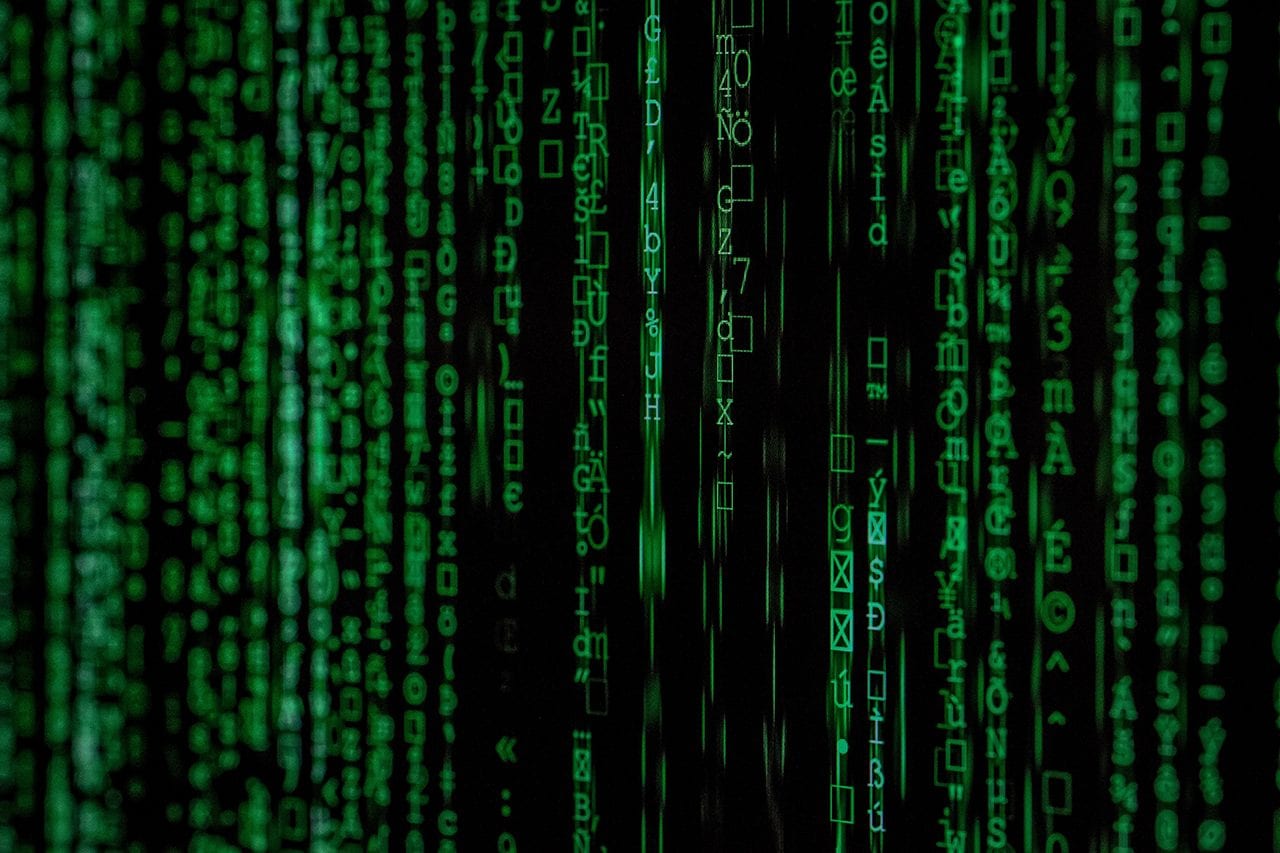 Marketing can, more often than not, be dishonest. That statement is now more true than it’s ever been. Everyone’s competing for your time, attention and money. And in that pursuit, those who want a few easy bucks often throw all sorts of scams at you.

That’s why you’re receiving spam emails, calls and even texts daily. I know you’re not falling for it, because such calls or emails are relatively easily recognizable. But the volume of received spam offers can be overwhelming and annoying.

Even though most spammers use email to try to lure you into, well, handing them your hard-earned money, the number of spam calls and text has been on the rise for years now. That’s why I’m going to show you how to block those unwanted calls and messages, and save yourself from stressing out every time your phone rings.

On top of that, these exact methods can be used to stop someone else from harassing you. I don’t know, a stalker maybe, or whoever disrupts your daily routine with constant calls.

How to block a number in Android Pie

You might be under the impression that blocking a number in Android Pie requires some special effort. But that’s not true. The process is as straightforward as it gets. You can block any number in a matter of seconds and with just a few taps.

However, the procedure isn’t the same on all devices. As there didn’t use to be a way of doing this in general, phone manufacturers had to develop their own ways of blocking a number. So the process may vary depending on the phone you’re using. Nevertheless, the method is still easy, regardless of your phone’s manufacturer.

I’m going to give you an idea of how it’s done on phones from the most popular manufacturers. And if that’s not enough, just browse YouTube or XDA forums, and I’m sure you’ll find the exact instructions for your device.

Block a number in stock Android

If you’re using a phone that comes with stock Android out of the box, like the Pixel 3 or Xiaomi Mi A2, everything you need is already inside your system. There are two ways of doing this. Both are equally simple, so you can choose whichever you like more.

The first method is to open the Phone app, and switch to the Recents section. Now, long-press the number you want to block, and choose Block/report spam. Just confirm, and you won’t be receiving any more calls from that number. 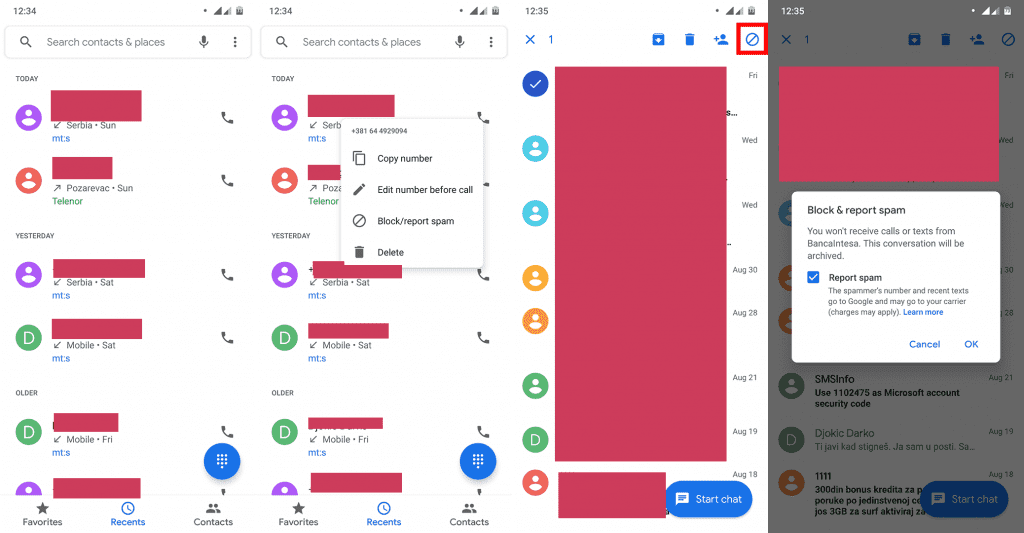 Another way to block a number in stock Android Pie is through the stock Messages app. Just open Messages, long-press a contact within the Messages app and tap the Block icon (circle with a line through it).

As you can also see, you can both block a number and report it as spam. To learn more about the difference, as well as what happens to a number you marked as spam, check out Google’s official support page.

Block a number on Samsung phones

As much as everyone likes stock Android, chances are you’re not using a Google or Android One device. Instead, your phone comes with the manufacturer’s own ROM, like Samsung’s OneUI. And if you’re using a Samsung phone, here’s how to block a number in your version of Android Pie:

Block a number on Huawei phones

To block a number on Huawei devices, go the Phone app, find the number you want to block, tap and hold it, and choose Block contact from the dropdown menu.

If you want additional options, like blocking calls from unknown numbers, stay in the Phone app, tap the (three-dot) menu, and go to Blocked. Here you can create different call blocking rules, as well as block messages from a certain number.

Block a number on Xiaomi phones

To block a number on Xiaomi devices, do the following:

Block a number on OnePlus phones

OxygenOS is a favorite custom ROM of many, mostly because of its resemblance to stock Android. Because of that, the process of blocking a number on a OnePlus device is the same as on stock Android.

If you still can’t find a way to block a number natively, using a dedicated app is always an option. On top of that, an app will give a wider variety of options, so you can gain absolute control over who’s allowed to call or text you.

There are numerous number-blocking apps in the Play Store, and since they all have the same purpose, you can pick whichever app you find most suitable. I’m going to list one app here, called Calls Blacklist, simply because it’s the highest-rated app of this kind in the Store. 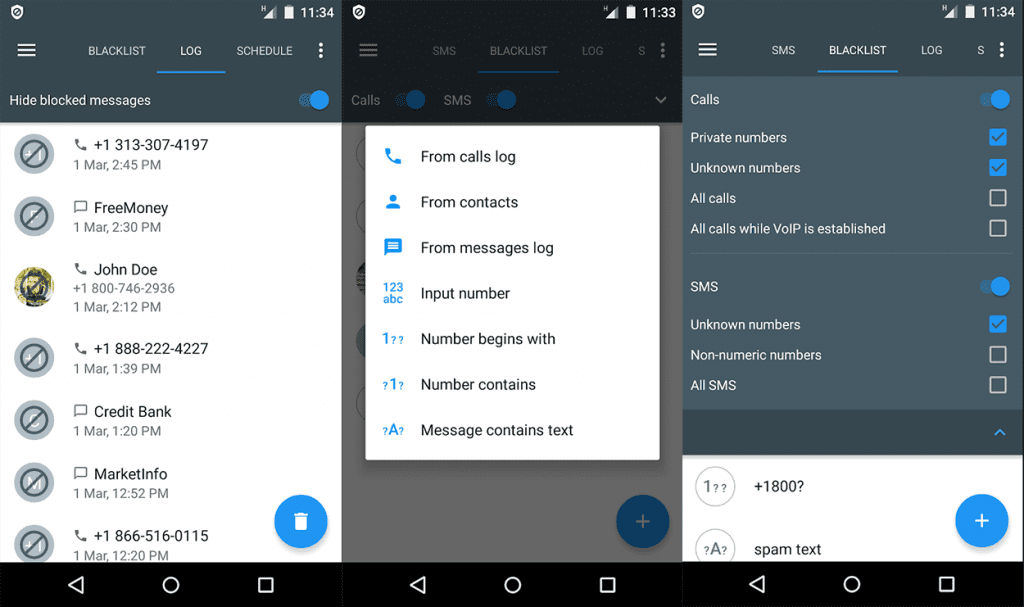 Calls Blacklist allows you to block a number from your call log, from your contacts, or to input the number automatically. There are also some handy additional features like blocking private numbers, unknown numbers, and non-numeric numbers. You can also bock SMS messages from a certain number. Another advantage of this app is that it keeps the log of all the blocked numbers, so you can manage them easily from a single place.

Will a blocked person know you’ve blocked them?

When you block a person’s number, they have no way of knowing that you’ve blocked them. Meaning, no one will receive a notification or a message saying something like “Jenny just blocked your number, stop being so pushy”, or something like that.

On the other hand, a blocked person will obviously notice that something’s wrong when they see they’re not able to make a call or send you a text message. When a blocked number calls you, the call will automatically disconnect, without reaching voicemail. Text messages, on the other hand, will go through normally for the sender, but you’ll never receive them. Also, the blocked number won’t get back the delivery notice.

That’s about it. Now you know how to block a number on your Android device (at least I hope so). If you have any comments, questions or suggestions, just let us know in the comments below.